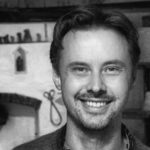 My making focusses on materials and process, often explored through the metaphors of seasons and landscape.

I also like traditional forms and glazes. In my spare time I work with residents as the Volunteer Potter at Bosence Farm Drug & Alcohol Treatment Centre, where I make pots.

I work full-time as the Curator at the Leach Pottery, St Ives, where I oversee an active exhibition programme. My focus for 2020/21 is delivery relating to the Pottery’s centenary celebrations. Previous areas of  research, curation, and publication activity have focussed on Emmanuel Cooper, David Leach and Trevor Corser.

I also love to work on freelance projects. Some of my current research interests include the life and work of Leach potter William Marshall and the design and production of Leach Standard Ware which occurred at the Leach Pottery over several decades from the 1940s onwards.

The Leach Pottery is currently stocking items from my tableware range and individual pieces like yunomi, guinomi, and lidded vessels.

I attended the inaugural Craft Skills Awards, in London, with Katie Bunnell on behalf of the Autonomatic Research Group at Falmouth University. We won the Judges’ Spotlight Award for digital craft – presented by the Prince of Wales. I also feature in the Craft Skills Awards Film recorded for the Awards. May 2013.

Scratch Magazine features one of my laser drawings on p40 of the PDF. September 2012.

Paint Pixels and Beyond 2

Paint Pixels and Beyond 2 features work from my Sea and Sky and Melting Snow collections on local TV. See 06:18 minutes onwards. September 2011.

Mosaic Magazine Issue 48 with pictures, text, and a little background to my involvement in ceramics and recent work. Issue 48, pp37-9, November 2010.

Heart Gallery, Hebden Bridge, West Yorkshire, to include pieces from across my Sea and Sky collection.
13 June – 24 July 2011.

Thanks to everyone who visited me at the popular and high quality GNCCF at Spinningfields, Manchester, where I focussed on my Sea and Sky and Melting Snow collections. 22 October 2010 – 24 October 2010.

Hatfield House is a great fair! Thank you for visiting me and all your positive comments about my Melting Snow pots. 6 August 2010 – 8 August 2010.

Thank you to everyone who visited me at The Art Market: your moral support and the sales of my Melting Snow are much appreciated! It was a good event with a great atmosphere and would highly recommend you to visit a future market if you’ve not been before. 6 June 2010.

Enter your email to stay up to date,